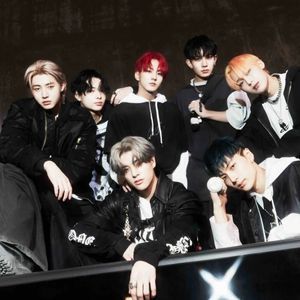 The name ENHYPEN means connection, discovery, and growth. Similar to how a hyphen connects words to discover a new meaning, ENHYPEN refers to how the members discovered each other, are connected to one another, and will continue to grow together.

ENHYPEN’s fandom name was announced on October 8, 2020 to be ENGENE. ENGENE combines the words engine, en (from ‘en’hypen), and gene. The name carries two meanings. One of them describes how fans represent a source of fuel and energy for ENHYPEN similar to an ‘engine’. The second meaning comes from the combination of en + gene, which represents the connection between ENHYPEN and fans through a common gene.

ENHYPEN is composed of seven members born between 2001 and 2005. Their names are: Jungwon, Jay, Jake, Niki, Heeseung, Sunghoon, and Sunoo.

Except for the position of leader held by Jungwon, ENHYPEN members do not have official positions or roles. The goal is for each member to be able to fulfill all positions at a high quality and be all-rounders.

Here are the positions of each of ENHYPEN's members based on their performances:

The hyung line of ENHYPEN is comprised of Heeseung, Sunghoon, Jay, and Jake. They are the oldest members. They were born between 2001 and 2002.

﻿I-Land (아이 랜드; 2020) was a South Korean survival reality show that followed the creation of the perfect Kpop boy idol group by BELIFT LAB, a joint company of Big Hit Entertainment (label behind BTS) and CJ E&M Entertainment. The show took place in the I-LAND, a state-of-the-art construction with 3 years in the making.

The top seven final contestants on the show became the members of ENHYPEN.

In Korean culture, each blood type has its own personality type. People often ask others their blood types to get to know the other person better.

Rankings and Most Likely To

Heeseung is the member with the longest training period (3 years and 1 month). Niki has the shortest training time (8 months).

Heeseung is the oldest member of the group. He had the longest training time prior to I-LAND. He was a HYBE trainee during the time TXT was getting ready to debut and trained with them. Unfortunately, he didn't debut with TXT but he used that as inspiration to debut when he was participating in I-LAND. Heeseung was considered an 'ace' in I-LAND because he had the perfect trifecta: visual, vocal, and dance skills.

﻿That's it?! I need to know more about Heeseung!﻿

Jay is one of the goofy ones in the group. He is the only member that was born in the United States; thus, he can speak English fluently. Born in Seattle, Washington, Jay is the son of James Park, the president of Sinar Tour. He was known for his memorable quote during the I-LAND show: R.A.S (resentment, anger, and shame).

﻿Jay is my ultimate bias!﻿

Apart from Jay, Jake is also a native English speaker. He was born in South Korea but was raised in Australia. He is the only member that that joined I-LAND through open auditions. He is very passionate but also clumsy. He ranked #3 in I-LAND.

﻿I need to know more about Jake!﻿

Sunghoon was a professional figure skater prior to becoming an idol. He practiced ice skating for 10 years and won several competitions before joining I-LAND. He is known as the ice prince, penguin, and ice boy. Sunghoon was voted as the most handsome member from I-LAND.

﻿I need more facts about Sunghoon!﻿

Sunoo was one of the most popular members in I-LAND. He was a fan-favorite and ranked #1 during several rounds of voting in I-LAND. He has a very delicate health. He talked about having health issues when younger while he was on I-LAND. Sunoo is known for his strong vocals and his very cheerful personality.

﻿Can't get enough of Sunoo!﻿

Jungwon is the leader of ENHYPEN. He was considered the secret 'ace' of the group because of his talents in singing, dancing, and his visuals. He was raised by his grandmother and competed in Taekwondo for four years. He ranked #1 in the I-LAND finale.

﻿I need more Jungwon in my life!﻿

Ni-ki is the youngest member of ENHYPEN. He was born and raised in Japan and started dancing from a very young age. He showed his strong dancing skills from the very beginning and was known for memorizing choreographies very quickly. He was a back-up dancer for Shinee. His final ranking in I-LAND was #4.