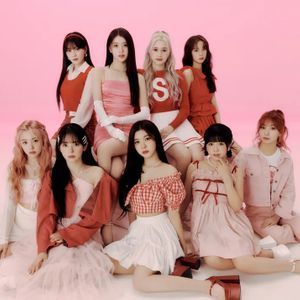 Kep1er (케플러; pronounced kepler) is a nine-member South Korean girl group formed through the survival show Girls Planet 999. Kep1er is a temporary group. They will be promoting for 2.5 years under WAKEONE Entertainment's and Swing Entertainment's management.

The official position of leader is held by Yujin. The co-leader is Mashiro.

These are the positions of each of Kep1er's members:

These are the final rankings from Girls' Planet 999, which determined the final members of Kep1er:

Choi Yujin is the oldest member and the leader of Kep1er. She is a former member of the Kpop group CLC. Yujin was part of the dance line. She ranked #3 in the final episode of Girls Planet 999.

Shen Xiaoting is the only Chinese member that made the final lineup of Kep1er. She was one of the most popular members among international fans. She was voted the prettiest member by the contestants of Girls Planet 999. Prior to Kep1er, she participated in Camp 2020. She also won a gold prize and ranked #1 in a modern dance competition in Shanghai. She ranked #9 in Girls Planet 999.

Specialty: cooking, dancing, staying still without doing or thinking about anything.

Sakamoto Mashiro is the co-leader of Kep1er. She was a trainee from JYP Entertainment. She trained alongside ITZY members. She stayed with the company for 2 years and left in 2018. She won the most votes from the J Group during the pre-broadcast one-pick voting. Prior to Girls Planet 999, she had been living in Korea for over 5 years. Her final ranking was #8.

﻿I want to know more about Mashiro!﻿

Kim Chaehyun was ranked #1 in the finale of Girls Planet 999. She is a former SM Entertainment trainee. Her specialty is singing. She became a trainee in her second year of middle school. She trained for 6 years prior to joining Girls Planet 999.

Hobbies: walking while listening to music.

﻿Can't get enough of Dayeon!﻿

Hobbies: relaxing in the hot spring.

Ezaki Hikaru is one of the two Japanese members in Kep1er. Her specialties are rapping and dancing. Her charming point is her smile (which looks like a sloth). She was the center of the J-Group's introduction video in Girls Planet 999. Her final ranking was #7.

﻿Hikaru is my bias!﻿

Huening Bahiyyih is the only member of Kep1er born in the United States. She is Korean-American. Bahiyyih is part Polish, British and German from her father, and Korean from her mother. She is the youngest of 3 siblings. She is the sister of Huening Kai from TXT and Lea from from VIVA. She ranked #2 in the finale of Girls Planet 999.

Seo Young Eun is the second youngest member of Kep1er. During Girls Planet 999, she showed her multiple talents in singing, dancing, and rapping. She quickly impressed fans with her rendition of NCT's Kick It early on in the show. Her final rank in Girls Planet 999 was #5.

﻿I need more of Seoyoung!﻿

Kang Yeseo is the youngest member (maknae) of the group. She is a former member of the kid's group QTL and was a member of the Kpop group Busters. She was only 13 years old when she debuted with Busters. Her final ranking in Girls Planet 999 was #6.

﻿Obsessed and need to know more about Yeseo!﻿