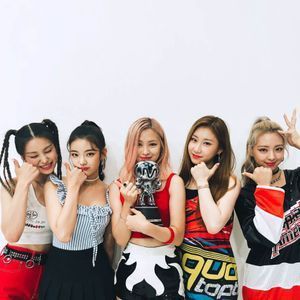 The leader and the oldest member is Yeji (born May 26, 2000). The youngest member (maknae) is Yuna (born December 9, 2003). All five members are of Korean ethnicity. Lia was born in South Korea but moved to Canada and lived there for several years. The rest of the members were born and raised in South Korea.

Several of the members participated in different competitions prior to their debut. Chaeryeong was part of Kpop Star 3 in 2013 and JYPE's survival show SIXTEEN in 2015 but was eliminated in both. Ryujin competed in JTBC's show MIXNINE in 2018 and was first place among girls but failed against the boys who won the competition. Yeji was a contestant in SBS' The Fan but failed to make it to the final. All of the members, except for Lia, appeared in the show Stray Kids in 2017.

Yeji is the official leader of ITZY. She is also the oldest member of the group. In 2018, prior to to her debut with Itzy, she participated in SBS’ show The Fan but was eliminated in episode 5. Her motto is "believe in yourself". Her English name is Lucy Hwang.

Lia is the main vocalist of ITZY. Lia is fluent in English as she lived in Canada for several years and studied in an international school. At the age of 14, while she was in middle school in Canada, she passed an audition with SM Entertainment to become a trainee; however, she ended up leaving the agency as her parents wanted her to focus on her studies.

Ryujin is the main rapper of ITZY. She is a former contestant of the survival show MixNine. She caught YG’s attention during the show and received an offer from him to join his company but she rejected it and stayed loyal to JYPE. Ryujin trained for 4 years before making her official debut with ITZY

Chaeryeong is the official main dancer of ITZY. She is former contestant of the survival shows Kpop Star and Sixteen. In 2012, Chaeryeong and her older sister, Chaeyeon, auditioned for Fantagio Entertainment but failed to pass. Chaeryong and her sister, Chaeyeon, also participated in the show Kpop Star Season 3 in the following year. Chaeryeong caught JYP’s attention, who was one of the judges on the show, and was recruited to be a JYPE trainee.

Yuna is the youngest member (maknae) of ITZY. In 2015, during a KBS Song Festival, she was offered to join JYPE by a casting staff. She was attending her first concert ever with her sister who wanted to see BTOB at the festival. While waiting on the road, a JYPE casting staff approached her and gave her a business card which lead to her JYPE audition. She played Floorball for 4 years between the ages of 11 to 15 (5th grade to 8th grade) and her uniform number was 7.