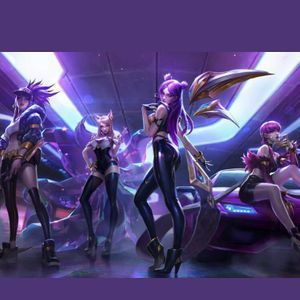 K/DA (also stylized KDA; acronym for kills, deaths, and assists) is a virtual League of Legends inspired kpop girl group formed and created by Riot Games. The group debuted with four members on November 3, 2018 with the single POP/STAR. They are set to make a comeback on August 27, 2020 with the single THE BADDEST.

K/DA skins for Ahri, Akali, Evelynn, and Kai’Sa are based on modern pop music. The Prestige skins are only available after completing special in-game missions.

K/DA is composed of four members inspired by League of Legends champions Ahri, Evelynn, Kai’Sa, and Akali. The voices behind them are singers (G)I-dle’s Miyeon, Bea Miller, Wolftyla, and (G)I-dle’s Soyeo, respectively. Ahri is a nine-tailed foxgirl. Akali and Evelynn are assassin-type characters. Kai’Sa is a marksman character.

Singers Madison Beer, Jaira Burns who were in 2018 the singers for Evelynn and Kai’Sa, will not be participating in the 2020 track ‘The Baddest’. Wolftyla and Bea Miller were announced as the new singers. (G)I-DLE members have remained the same in both songs.

From tallest to shortest: