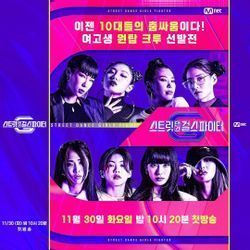 The leaders of each of the eight dance crews from Street Woman Fighter will be judges and mentors: Leejung, Noze, Gabee, Rihey, Monika, Honey J, Aiki, and Hyojin Choi. Kang Daniel will be coming back again as the MC of the show.

The final episode on January 4, 2021 announced the winning crew to be TURNS from the YGX team.

The contestants of Street Dance Girls Fighter are female high school students that perform together as part of different dance crews.

Here are the final rankings of the Street Dance Girls Fighter:

Several members of each of the dance crews from Street Woman Fighter have been selected as the masters.