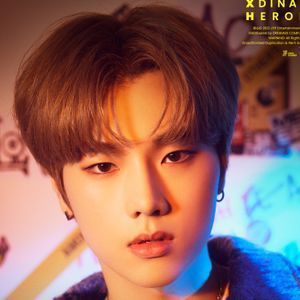 Kim Jungsu (김정수; born Jun 26, 2001), simply known as Jungsu, is a member of the South Korean boy band Xdinary Heroes under JYP Entertainment. His position in the band is keyboardist and main vocalist. He made his debut with Xdinary Heroes on Dec 26, 2021 at the age of 20.

Ever since he was young, Jungsu's dream was to become a singer. Despite his parents' opposition, he joined a vocal club in his high school. He then worked on persuading his parents to attend a music academy. His teacher suggested he participate in an idol audition, so he applied to the 15th JYP Entertainment audition and passed.

He was originally part of a dance trainee team with O.de but both of them were suggested to join the band trainee program. He trained for about 3 years. He joined about 2 months after O.de.

As part of the Xdinary Heroes band, Jungsu is in charge of the keyboard. He originally learned to play the piano when he was 7 or 11 years old. While he didn't play all the time, he practiced even more after joining the agency as a trainee.

Jungsu's ideal type, based on his zodiac sign, is someone whom they can feel comfortable and safe with. Cancer types look for lasting relationships. They are very giving and attentive. They are most compatible with other signs like Pisces, Scorpio, Virgo, Taurus, and Capricorn.