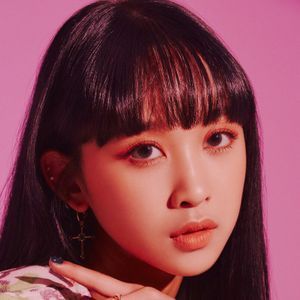 Anak Agung Ayu Puspa Aditya Karang (born Dec 25, 1996), better known as Dita, is an Indonesian singer and member of kpop girl group Secret Number formed by VINE Entertainment. Dita trained for 2 years before officially debuting with Secret Number on May 19, 2020 at the age of 23.

Dita was born and raised in Yogyakarta, Indonesia and she is from Balinese descent. Balinese people are an ethnic group native to the island of Bali. She grew up loving Kpop music and doing Kpop dance covers.

She moved to New York, United States to study at the American Musical and Dramatic Academy’s (AMDA) dance theater program to pursue a career as a performer. Dita eventually gave up on a musical theater career. While in NY, she auditioned for VINE Entertainment with a Taylor Swift song but wasn’t accepted.

She moved to Seoul and participated on 1MILLION Dance school classes, known for choreographing for famous kpop groups. She auditioned for multiple agencies including SM Entertainment, YG Entertainment, and JYP Entertainment and was rejected by all of them. In 2017, she successfully joined VINE as a trainee after she was able to get another audition through a friend who worked at a Kpop studio in New York. She made her debut with Secret Number in 2020.

Her charming point are her big eyes.