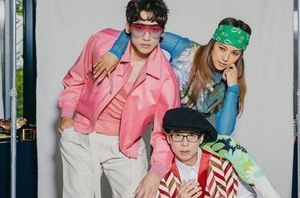 Hangout with Yoo (also called How Do You Play?) is a South Korean reality show program on MBC around the projects that Yoo Jae-suk takes on during his days off.

SSAK3 is the short for SsakSseulYi, which means to sweep in Korean. The 3 represents the three members. The meaning of the name SSAK3 is that the group will be ‘sweeping’ through the music charts.