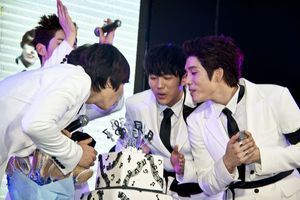 2AM (투에이엠; debuted 2008) is South Korean boy group formed through the TV show Hot Blood Men under JYP Entertainment. The members of 2AM include: Changmin, Jinwoon, Seulong, and Jokwon. The group debuted in 2008 and remained active through 2014. In 2015 and 2017, several members left JYP Entertainment so the group was on hiatus.

2AM is composed of four members born between 1986 and 1991. Their names are: Changmin, Jinwoon, Seulong, and Jokwon. All four members are of Korean descent and nationality. They were selected through the reality show Hot Blood Men which formed 2AM and 2PM.