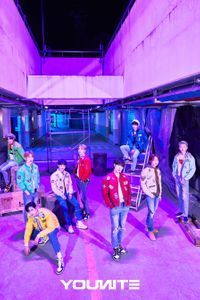 The name YOUNITE is a play on the words YOU & I. A video announcing the new Kpop boy group with the logo We Are Connected was released on Feb 13, 2022.

The members of YOUNITE were previously known as BRANDNEWZ. BRANDEWZ is the pre-debut group of boy trainees under Brand New Music.

Steve was born in the United States. The rest of the members were born in Korea.

Several of the members participated in idol reality shows prior to YOUNITE's official debut. Eunsang was part of Produce X 101 and he made his debut as part of X1. Sehyeon was a participant in High School Rapper 4. Kyungmun was a contestant in JYP's and Psy's reality show LOUD.

Here are the positions of YOUNITE members:

Here are the MBTI personality types of YOUNITE members:

Eunho is the oldest member and only 01 liner of YOUNITE. He studied at SOPA (Seoul of Performing Arts High School). His position is the main vocalist. His MBTI is ISFP.

Steve was born in LA, United States. He moved to Korea when he was 14. He can speak English and Korean.

Hyunseung studied at Shinmok Middle School and High School. He practiced running when he was in high school.

Lee Eunsang is a former member of the boy group X1, which disbanded in 2020 following the vote manipulation controversy from the Produce series. He was selected as the X member on the finale and became the final (11th) member of the group that was formed, X1. He debuted as a solo singer on August 13, 2020 with the album Beautiful Scar. Lee Eunsang made his debut with YOUNITE in 2022 at the age of 19.

﻿Find out more about him here!﻿

Woono was 18 years old when he debuted with YOUNITE in 2022. He is from Gyeonggi-do Ansan, South Korea. His position in YOUNITE is dancer.

DEY was a contestant in the reality show High School Rapper 4. His position in the group is rapper. He made his debut with YOUNITE at the age of 18.

Lim Kyungmun is a former trainee from JYP Entertainment. In 2021, he became a participant in the survival show LOUD but was eliminated from the show. Shortly after, he left JYP Entertainment and joined Brand New Music. His talents include: vocal, dance, table tennis, badminton, and jump rope. See his full profile here!﻿

Sion is the youngest member of YOUNITE. His MBTI is ENTJ. He was 17 years old when he debuted with YOUNITE.