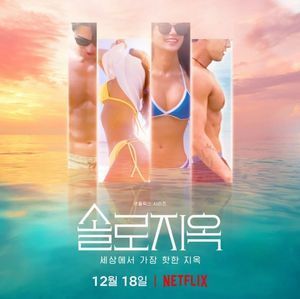 Single's Inferno (솔로지옥; 2021-2022) is a South Korean reality dating show that premiered on December 18, 2021 through Netflix. Twelve single contestants in total (6 female and 6 male) live together in a deserted island, aka the Inferno. Once a couple is matched together, they can enter the Paradise, a luxurious hotel suite.

The cast of Single's Inferno includes 6 female and 6 male contestants. The show started with 9 original contestants but more participants were added later in the show.

The contestants' ages ranged from 23 to 33 years old at the time the show was airing.

The cast members of Single's Inferno and their ages are:

There were 4 couples matched on the final episode:

Kang So Yeon (강소연; born May 23, 1988) is a model, Youtuber, and owner of a boxing gym called HitFit. She is a former trainee from JYP Entertainment. She was part of the Kpop co-ed group called WE in 2011 under the stage name Rosie. Kang So Yeon is 172 cm (5'8'') and has an estimated weight of 57 kg (126 lbs). She was 33 years old when she was participating in Single's Inferno. She does yoga, pilates, swimming, weightlifting, golf, jiu-jitsu, judo and tennis. She also appeared in the web-drama The Facetale: Cinderia.

Cha Hyun Seung (born May 2, 1991) is a South Korean dancer, model, and fitness competitor. He has collaborated with Sunmi and was known as the the ‘tanned’ guy after a water festival performance created a lot of buzz. He has worked with TVXQ, BtoB, SNSD, and EXO.

His participation in Single's Inferno was rumored by fans prior to the show airing after seeing someone with similar tattoos to him appear on the show's trailer. This was confirmed when he joined the cast on episode 5. He was 30 years old when he was on Single's Inferno.

He thinks his charm is his well-proportioned body and his smile. He works out 6 days a week and likes water sports like freediving and waksurfing. Cha Hyun Seung and Kim Hyeon Joong knew each other before joining the show. They work out together at the gym. He also knew Ji A prior to Single’s Inferno although they had not officially met.

Prior to the show, he was single for 3 years. In terms of romantic ideal type, he likes women who are cheerful, positive, and have a beautiful smile. He looks for someone he can click with.

Oh Jin Taek (오진택; born 1992) is the owner of a British-style tailored suit brand called Ascottage, which he started in 2019. He graduated from Business Management. He is a perfectionist. He has a younger sister. Oh Jin Taek was 29 years old when he was on Single's Inferno.

His ideal type are sexy, healthy, and tall women.

Choi Si Hun (최시훈; born Oct 27, 1992) is an actor and the CEO of a fashion brand. He was an idol trainee under Polaris Entertainment. He was part of the Kpop group TRIPLEME. He appeared in the Korean dramas I Started Following Romance (2019), Clumsy Love (2019), and Cafe Kilimanjaro (2020). Choi Si Hun was 29 years old when he was on Single's Inferno.

In terms of romance, his ideal type is a woman that knows her charms. While it may take him a long time to figure out who he likes, once he is sure, he goes all in.

Kim Jun Sik (김준식) is a South Korean entrepreneur and the CEO of a health product brand. He founded the company in his junior year of college. The main product of his business is wild-simulated ginseng. He likes cooking, photography, and exercising. Kim Jun Sik was 28 years old when he was participating on Single's Inferno. He prefers summer over winter and meat over sashimi.

His ideal type of women are those with a 'cat-like look'.

Kim Hyeon Joong (김현중; born 1994) is a professional trainer and model. He is very active and loves working out. He stays in shape by exercising at least 2 hours each day. He was the first runner up at the 2019 Mister World Competition. His charming points are his dimple, his body, and his cute butt. He was 27 years old when he was participating in Single's Inferno.

His ideal type is someone who also likes to work out.

Moon Se Hoon (문세훈; born 1995) runs a restaurant business in Gangnam. He has been working in that field for 6-7 years prior to the show. He is a household-chore-lover and a great cook. He also thinks he is good at washing dishes. He likes working out. He mentioned that if he likes someone, he will go to large extents for that girl and never give up. He was 26 years old when he was participating in Single's Inferno. He won the first challenge and showcased he is a very fast runner.

His ideal type of woman has thick lips and is able to express her true emotions.

An Yea Won (안예원; born 1995) is a South Korean personal trainer, Pilates instructor, and fitness model. She was born in Busan, South Korea. She describes herself as someone clumsy and playful. An Yea Won was 26 years old when she was in Single's Inferno. Her ideal type is someone with nice teeth. She loves jogging, going to the beach, and getting a tan.

Song Ji A (송지아; born Apr 30, 1997) is a model, Youtuber, and social media influencer. She has over 600K subscribers on her YouTube channel that she started in 2019. She studied traditional Korean dance at Hanyang University in Seoul. She describes herself as sexy and cute. Song Ji-a is 163 cm (5'4'') tall and has an estimated weight of 44 kg (97 lbs). Ji A was 24 years old when she was participating in Single's Inferno.

﻿﻿﻿Find out more about her personal life, lookalike, plastic surgery, and more!﻿﻿﻿

Shin Ji Yeon (신지연; born 1997) is a neuroscience college student at the University of Toronto. She was the first participant to enter the Single's Inferno island. She was inspired to study neuroscience because her grandfather suffers from Alzheimer's disease. Shin Ji Yeon was 24 years old when she was in Single’s Inferno. She stands at a height of 5'5''.

When it comes to dating and romance, she knows what she wants and will easily turn down a guy that isn't her type. Ji Yeon's ideal type is someone with a good personality and that can influence her in positive ways. She likes someone who is trustworthy, manly, decisive, and sweet. She prefers someone who is older than her.

Kim Su Min (김수민; born 1998) was the new participant joining on episode 5. She is a model by profession and does modeling for ads, in particular face beauty products. She describes herself as bright, energetic, and friendly. She said she is popular among guys. Appearance-wise, she has distinctive dimples and a very bright smile. She thinks it's important to believe in herself and have confidence. Kim Su Min was born in 1998; thus, making her 23 years old at the time she was in Single's Inferno.

In terms of ideal type, she likes someone with thick double eyelids and someone who is true to their feelings.

Seong Min Ji (성민지; born 1998) is the second new female contestant to join on episode 5. Outside of the show, she is a model for cosmetic and clothing brands. She appears cold and hard to approach at first but once you get to know her, she is very friendly and playful. She likes hip-hop music and video games. Her favorite game is Overwatch.

She has a twin sister called Seong Min Ju (Instagram: @pink.s2_). Both sisters appeared in a KFC advertisement. Seong Min Ji was born in 1998; thus, making her 23 years old at the time she was in Single's Inferno.

In terms of romance, her ideal type is someone with a pretty nose and who has hobbies and taste similar to hers. She is very competitive and will go after the person she likes without giving up.