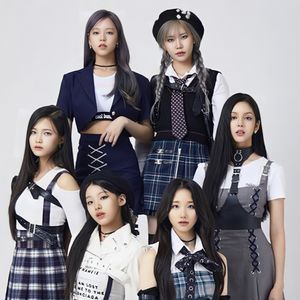 LAPILLUS (라필루스) is a 6-member South Korean girl group under MLD Entertainment. They debuted on June 20, 2022 with the single HIT YA! The members of LAPILLUS are Chanty, Shana, Yue, Seowon, Bessie, and Haeun.

The name LAPILLUS is a Latin word that means a jewel that changes color depending on the direction of light.

LAPILLUS is composed of 6 members born between 2002 and 2008. The members are: Chanty, Shana, Yue, Seowon, Bessie, and Haeun.

LAPILLUS has 3 Korean members and 3 foreign members. Yue, Chanty, and Shana were born outside of South Korea. Chanty is was born in the Philippines and raised in Argentina; she has dual citizenship. Shana is Japanese. Yue was born in the United States and is of Chinese descent. The 3 youngest members are Korean.

In terms of positions, Shana is the leader. Bessie and Yue are main vocalists. Seowon is the main rapper. Haeun is the main dancer. Here are the positions of each of the members of LAPILLUS:

Chantal Videla, simply known as Chanty, is a Filipino-Argentinian actress, and model. She was born in Manila, Philippines and raised in Argentina. Because of her multi-cultural background, she is able to speak several languages, including: Spanish, Filipino, English, and Korean. Chantal stands at a height of 170 cm (5'7'') and has an estimated weight of 48 kg (106 lbs). She was 19 years old when she debuted with LAPILLUS. Chanty is the oldest member of the group.

Shana is from Japan. In 2021, she became a contestant in the survival show Girls Planet 999 and stood out for being a great vocalist. Shana stands at a height of 158 cm (5'2''). Her MBTI is ENFP. She was 19 years old when she debuted with LAPILLUS.

Yue is Chinese-American and her birth name is Nancy Yang. She was born in the United States and can speak several languages including English, Korean, Chinese, and French. Yue was 17 years old when she debuted with LAPILLUS in June of 2022. She stands at a height of 163 cm (5'4'') and has an estimated weight of 48 kg (105 lbs). She most likely uses her stage name, Yue, to avoid using the same name as Nancy from Momoland.

﻿Get to see her full profile here!﻿

Bessie (베시) is one of the main vocalists of LAPILLUS. She is from South Korea and an INFP. Bessie is known as the vocal queen with explosive singing ability. She is a former trainee from SM Entertainment. She is an 04' liner and was 17 years old when she debuted with LAPILLUS.

﻿Check out her full profile here!﻿

Seowon is the main rapper of LAPILLUS. She was 15 years old when she debuted with LAPILLUS. She studied at Wolgye Middle School. She is the second youngest member of the group after Haeun. She joined MLD in 2020 through an audition.

Haeun is the youngest member (maknae) of LAPILLUS. She is an '08 liner and was 13 years old when she made her debut with LAPILLUS in June 2022. She is the center and the main dancer of the group. At the time of the group's debut, Haeun was the youngest active idol in South Korea outside of Kids' Idol groups. Prior to that, Seonyou from CLASS:y was the youngest.